Lately I’ve only been doing post on finished or paintings with a lot of work already done on them. I’m going to start trying to instead do posts as I go, so I can write a little more detail, and there isn’t as much time in between posts.

So this is a new painting I started 2 days ago while waiting for another painting to dry. The lighting was inspired by my previous post, and it is based on a photograph I took, although the photo has no water at the bottom and was taken around noon.

After doing the rough studies for my previous post, I started to think that I should start my paintings the same way: just blocking out the colors without any detail or much blending. Lately I’ve been approaching paintings in less direct ways, building up transparent layers of color, and other layering methods. I think it makes the beginning of the process confusing, and starting with a much more direct approach seemed to help here. Details and layering effects can be done on top. 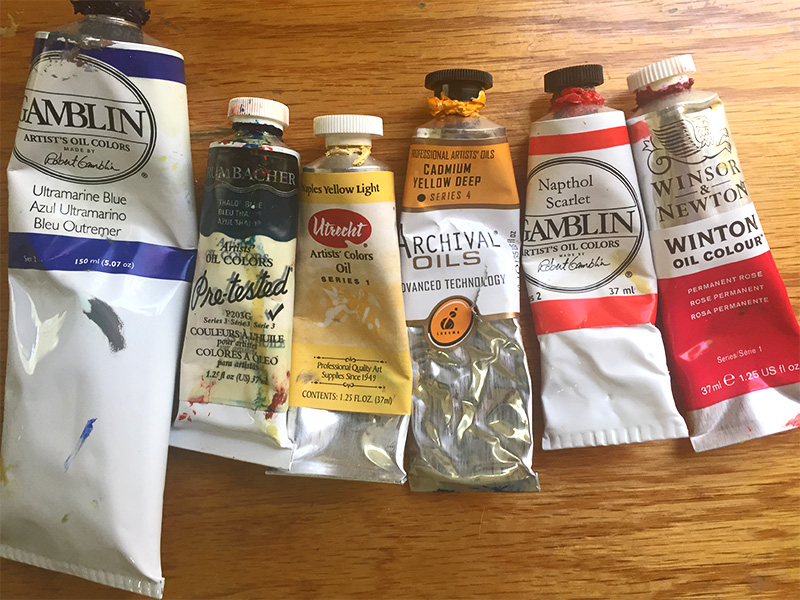 I thought it might help to show the palette of colors I used to create the painting up till this point, because I didn’t use my full palette, and consciously avoided using any white. The paints, from left to right are: Ultramarine Blue, Pthalo Blue, Naples Yellow, Cadmium Yellow Deep, Napthol Scarlet, and Permanent Rose. Burnt Umber was also used. I’ll refer to the colors by shortened names for the rest of the post.

The painting was started on a medium gray acrylic ground. The basic shape of the cliff side was roughly brushed in using a yellowish color, then I set it aside for a day or two before really “getting started” on it.

Up to this point I’ve covered the canvas in thin, but mostly opaque paint, thinned using copal medium which speeds drying time. I started by painting the sun, then just filling in the sky going outward from there. Then filling in the cliff side from the sun outward. The water was filled in last. The sun is pure Naples Yellow. As white decreases the saturation of colors I wanted to avoid using it, even in the brightest areas. Instead, I wanted to create the brightness by using high value contrast and high saturation contrast, as explained in my previous post. As I moved out away from the sun, I mixed more Cad Yellow into the paint, and The orangest areas have Scarlet mixed in too. As I move out from these bright areas, I began to desaturate the color by mixing in some Umber, and even farther away, a little Pthalo blue. Scarlet was only mixed in where it appears orange.

The cliff side color is mixed from mostly Scarlet, Cad Yellow, and Umber, in the lighter areas. As the color shifts into shadows, the Scarlet is traded out for Rose, which unlike the Scarlet, has a blue undertone. Small amount of Ultramarine are also mixed into the darkest areas. As I painted the cliff, my main goal was just to cover the entire surface, although since I had the gray ground in place, I wasn’t concerned about leaving any little gaps, as these will just add texture later on anyways.

Next I began adding in some rocks into the foreground, just silhouette shapes since they are mostly in shadow. The color mixture is mostly Umber, Rose, and Ultramarine. The water covers many smaller rocks, but these details can be added in later, for now I just wanted to define where the water is. The brightest area of the suns reflections are a mixture of Cad Yellow, and Naples Yellow. As I move out from it, just Cad Yellow. Pthalo blue, mixed with burnt umber and Cad Yellow fill the lower right portion of the painting. I found that Pthalo Blue has very strong tinting ability, so only a little needed to be used.

Please let me know if you like the idea of making more frequent posts, showing the work as I make it, rather than waiting to post till the end and writing everything all at once. Doing it this way, I can remember more details, but let me know if it is interesting this way or not. As always, thanks for reading.

One thought on “Sunset Cave”