First let me point out that the paintings in this post are not my own. The rough copies on the left are mine, and intended to simplify the colors so that they can be viewed and analyzed more easily. The way we view any color in a painting is affected by all the colors that surround it, so by doing these loose copies, with larger areas of solid color, it becomes easier to see the colors themselves, with less influence from the surrounding colors.

I’ve been working on a painting with similar lighting to the paintings in this post for the last couple weeks, and having trouble getting it to look just right, which is why I decided to do these studies. I was inspired to paint this sort of lighting when I was driving home on the freeway a few weeks ago, into the sunset. The sun was blindingly bright, just bright orange burned into my vision. Terrible lighting for driving in but I thought it’d be great for painting.

The common problem that arises when trying to paint light is that the range of value capable of being achieved with paint is pretty limited. Leaving the canvas white, or just painting it white is as light as it can get, and looking at a white canvas is no where near as bright as the actual sun. Tricks aside, like making the actual surface reflective, so that it reflects actual bright light back at the viewer, lets take a look at a few paintings that I think get this lighting well.

Here, bright saturated orange, radiates out from the sun in the center. That brightness bleeds even into the mountains in front of it. The blues are relatively muted, there are even some browns in the water.

Here as a gray scale version, so that the value range can be seen more clearly. Interestingly, the brightest parts of the scene do not translate into very light grays or white. You might think that the brightest areas white be covered in white, but the painter as another tool to achieve brightness with: saturation.

The rule within this painting appears to be basically this: the most saturated colors are warm colors, cool colors are less saturated. Lets look at another painting and see what we can learn.

The most interesting part in analyzing the colors in these paintings, is seeing how the cool colors are achieved. Obviously bright oranges and yellows are being used, but how is the blue of the sky and water being made? Using a bright blue wouldn’t fit into the lighting of the scene. Instead, the water is very gray and desaturated, with hues ranging from greens, to browns, and purples. Even the blue of the sky is actually a pale brown.

The value and saturation images are similar to what we saw in the previous painting. This is a good time to talk about contrast in painting. Because, as I previously mentioned, the range of value achievable is limited in painting, other methods have to be used to create the illusion of light. Contrast is the best way to do this, and given that colors have 3 basic properties (hue, value, and saturation), it follows that there are also at least 3 ways to contrast any given colors.

For the rest of the post, I’m just going to show the image analyses of 2 more paintings.

The value contrast is very extreme in this painting… 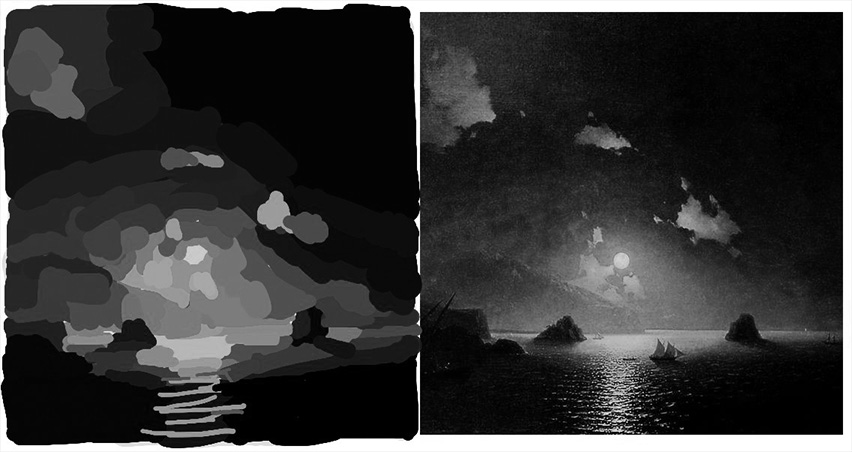 Although the lightest areas are actual not that light. The extremely dark areas make the middle grays look much lighter, also helped by…

The extreme contrast of saturation between the orange and near black.

This painting pits red and orange against blue-ish green. Complementary colors are used to create great contrast of light.

The painting is fairly dark in value over all. Mostly mid value, except the near black area to the left and the near white of the sun.

More contrast is created through the saturation, which simply fades away more and more as it gets away from the sun. Note that the sun appears to have very low saturation because it is near white.

Well I hope you found this post interesting. It went a little more into color theory than I intended, but it seemed like a good time to talk about saturation. Hopefully soon I will make a post on the painting I’m making that I did these studies for, but its currently been drying for about a week so I haven’t been able to work on it. As always, thanks for reading.

One thought on “Color Theory Sunset”