This is a painting I actually started a few months ago, and worked on it on and off, but never wrote a post about it. I started it so long ago I don’t think I can remember a lot of details about the process, but hopefully the photos and brief descriptions will suffice. I’ll start with the finished picture, and then show some of the process. I’ll end with some photos of details. The finished painting and details can be clicked to view larger. 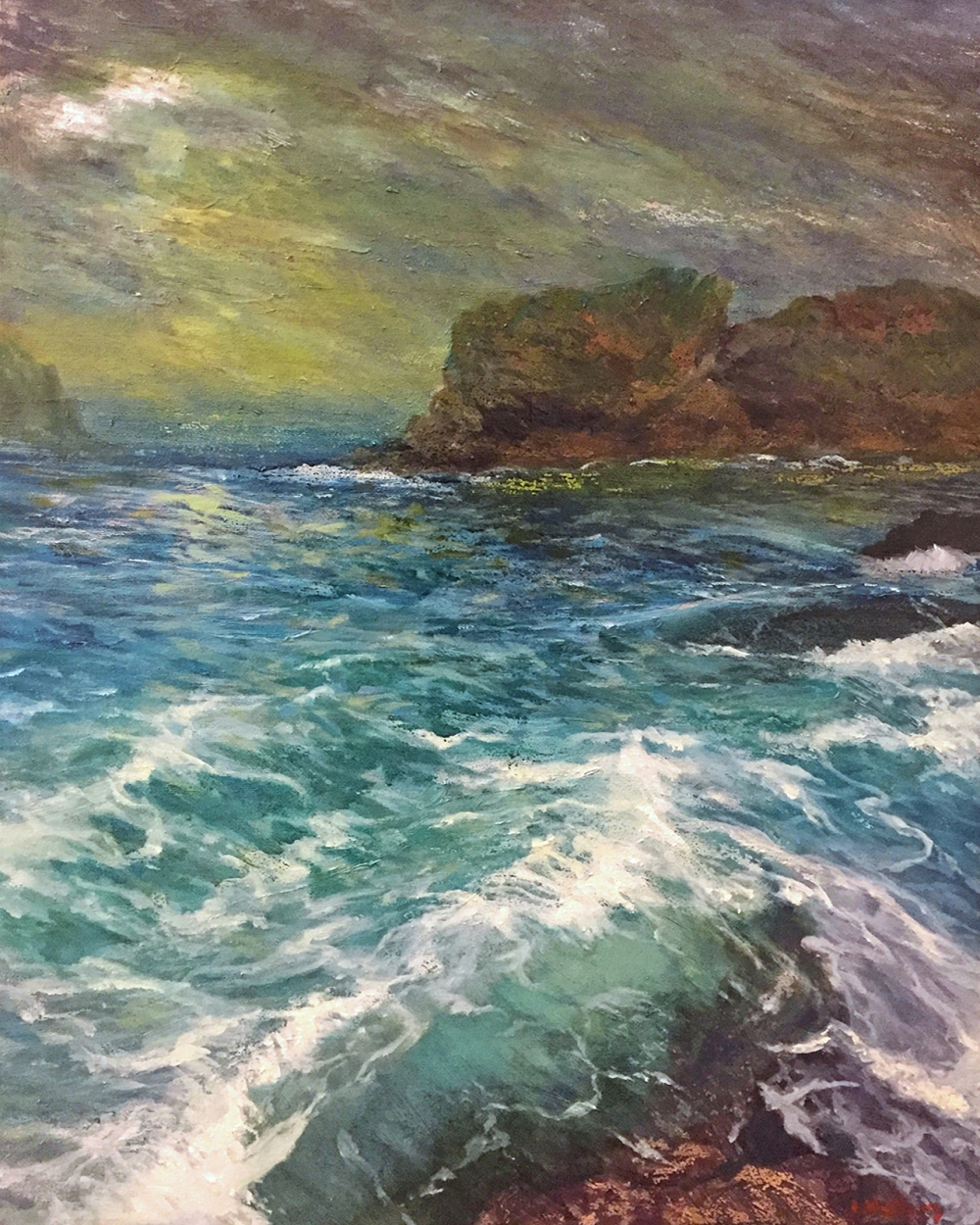 This is the finished painting. Now here is the process:

The painting was started on a canvas roughly toned with a darkish brown/purple glaze, which can still be seen through the rough brushwork. Everything was intentionally painted lighter than I intended the finished painting to be. Since this painting is two thirds water, I wanted to try to build up the painting through glazes. Glazes give the painting a sort of shiny, glassy feel. If you view the finished painting up close, all the thin transparent layers give the surface a little bit of depth. I feel that these qualities mimic the qualities of water, which is why I felt it important to approach the painting this way.

The light colors of this under painting will show through the transparent glazes and give the final painting a more luminous effect. Since glazes don’t offer much in terms of texture or brushstrokes, I painted the under painting roughly so that the brush strokes would still be apparent in the finished piece.

At this stage of the painting I had applied 1 or 2 glazes over most areas of the painting. The lighter areas of the water were painted over with thinner glazes, or fewer glazes. Some of the white foam on the water is just the under painting showing through, and some is white paint applied on top. In some areas, the canvas resisted the paint from the glaze, as shown below.

I still don’t know why this happened, perhaps the canvas was treated with something strange, but in this case I think the effect is beneficial.

At this stage, I added more glazes into the darkest parts of the water. After the glazes dried, some lighter ripples were painted on opaquely. The white foam on the water was painted partially wet into wet, while glazing, and the whitest areas where added on top after the glazes dried. The sky was altered somewhat as well. 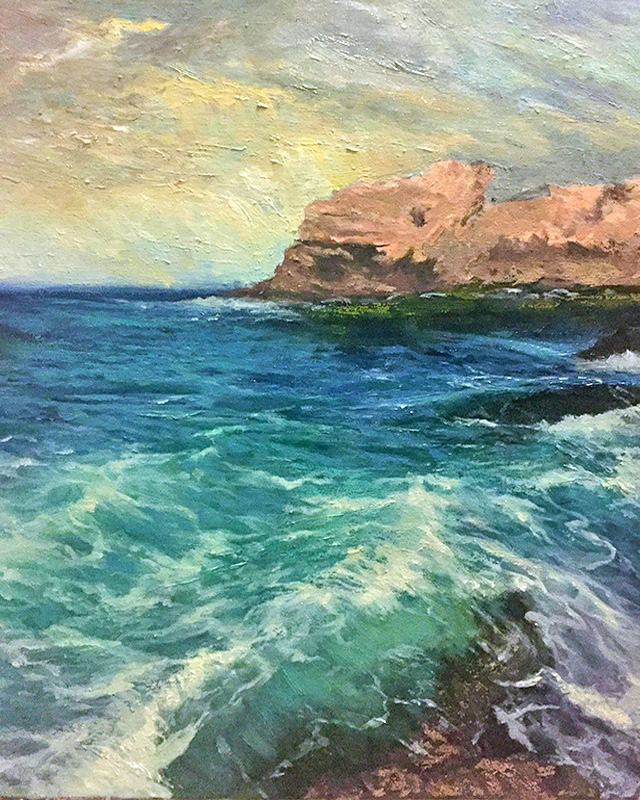 After this, I was pretty happy with the water and decided to change the sky. I didn’t take pictures after every session but I re painted the sky several times after this. Each time I repainted the sky I would use a mix of thin transparent paint, and opaque paint with more visible brush strokes. I wouldn’t paint over every part of the sky so this built up a lot of texture and depth in the sky, which can be seen in the details later in the post.

Eventually, I decided to change the painting to a night time scene. Some opaque brush strokes were added to the water to show the reflection of the yellow in the sky. The rock structure in the background was changed to more of a silhouette. 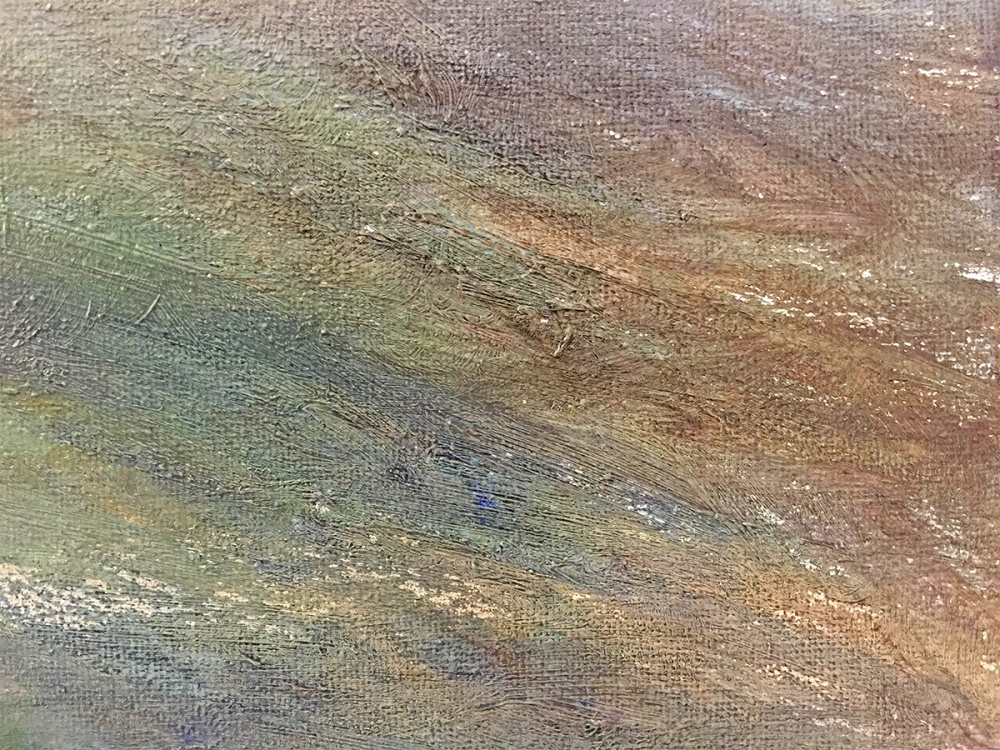 This detail shows the upper right hand corner of the painting. You can see how repainting it so many times built up a lot of texture. In the end, the sky is composed of many subtle colors glazed together. Some of the light areas in the sky were painted with reflective silver paint, which uses aluminum powder as its pigment.

This is the top left area of the water. Some of the reflections in the water are also painted with silver paint. I painted the reflections of the sky opaquely, because those are are areas of the water that you don’t see through, therefore I felt they should be treated differently.

The wave at the bottom of the painting is washing over a rock covered in kelp. The surface of the rock is very sharp and jagged. When the dark glaze I put over the under painting resisted part of the rock, I liked the way it looked so I didn’t add any extra detail to it. 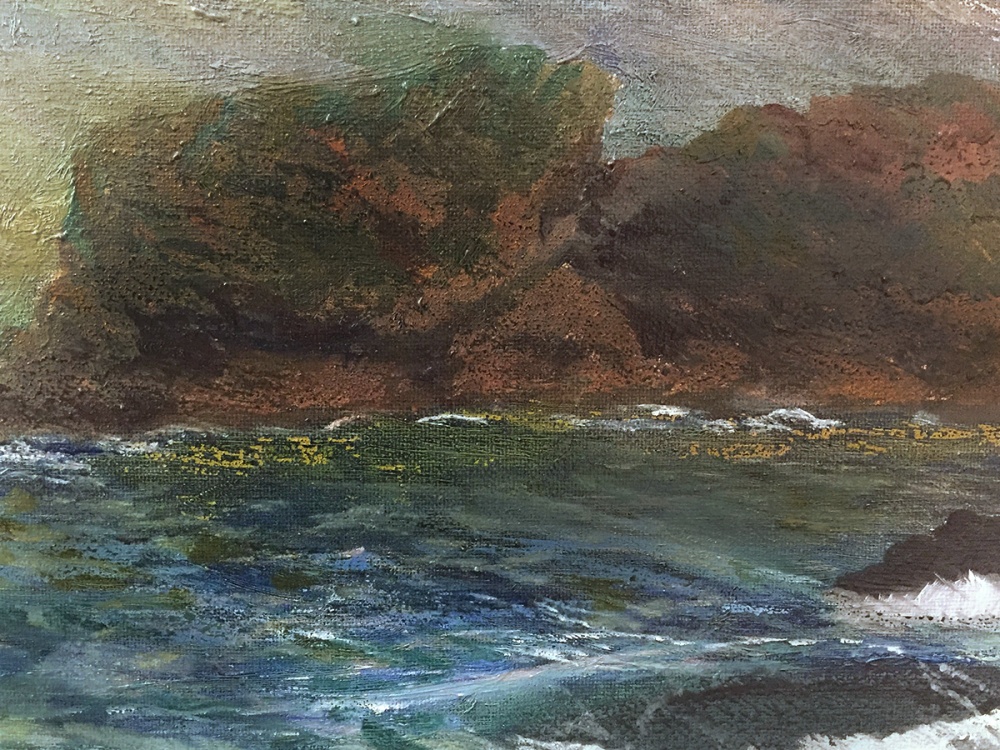 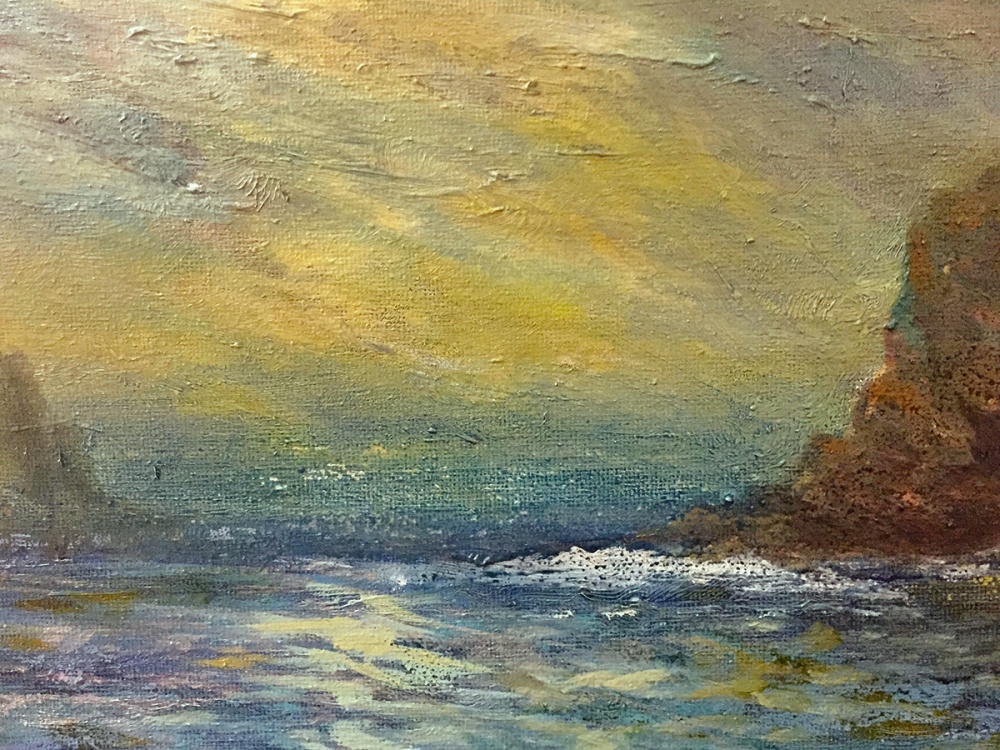 After I decided to change the painting to night time I added the colors pthalo blue and pthalo green to my palette. These are both semi-transparent colors so they helped in doing glazes.

The upper left corner of the sky. The lightest areas are painted with silver paint.

I hope you enjoyed seeing this painting’s process. I have been working on some other paintings as well, despite not posting in a long time. I have been working on some sort of experimental painting techniques and applying them to some paintings. The paintings are not quite ready to post about but hopefully soon I will make a post about the techniques in and of themselves first, as an introduction.