I wrote a post about this painting about 2 weeks ago, and here is the finished painting. I figured I would just start with the picture of the final painting before going into other things. I actually finished this about a week ago, but hadn’t gotten to writing a post, which I probably should have while the process was more fresh in my mind. I have made all the images in this post clickable, so you can look at them more closely if you want, and there will be some close ups at the end of the post, but first I’m going to go into the process of of the painting from where I left off in the last post. 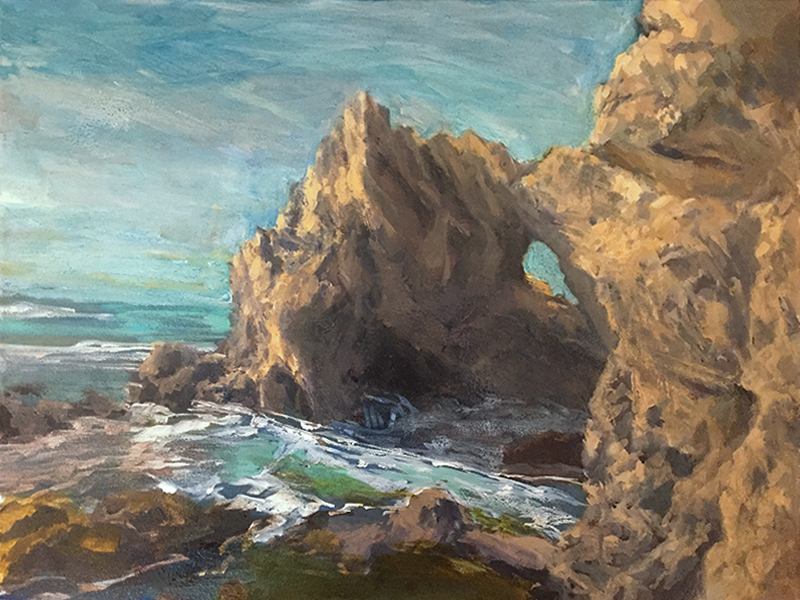 Before I start, here is how the painting looked at the end of the previous post, to give some context. 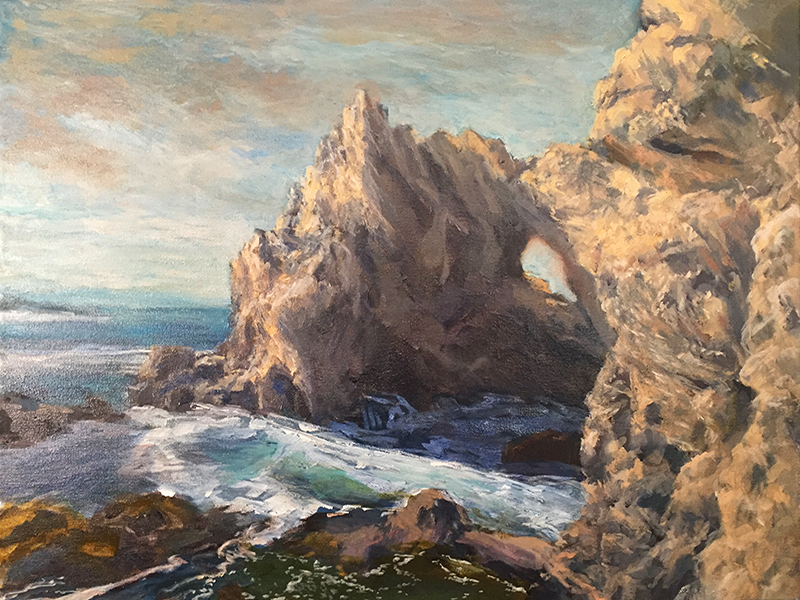 It may be a little difficult to see in this picture but the next thing I did was to start to add a little more detail to the main rocky structures using a mix of mostly white and a little Naples yellow, thinned down to a liquidy consistency using a new medium called Galkyd Lite, which is made by Gamblin. I bought this new medium because, according to the packaging, it speeds drying, and retains brushstrokes. It also increases transparency and gloss. I’ll talk a little more about the benefits and draw backs of this medium, as compared to linseed oil, throughout the post. The first thing I will note about it is, that when doing this very thin details in white, I noticed that the paint was much more transparent when dry. Back to the painting, I also added more details to the rocks using dark paint to add extra shadow details in the light part of the rocks.

Also at this stage, I added some detail of the white foam in the water at the very bottom of the canvas, also thinned with the Galkyd Lite the same way. 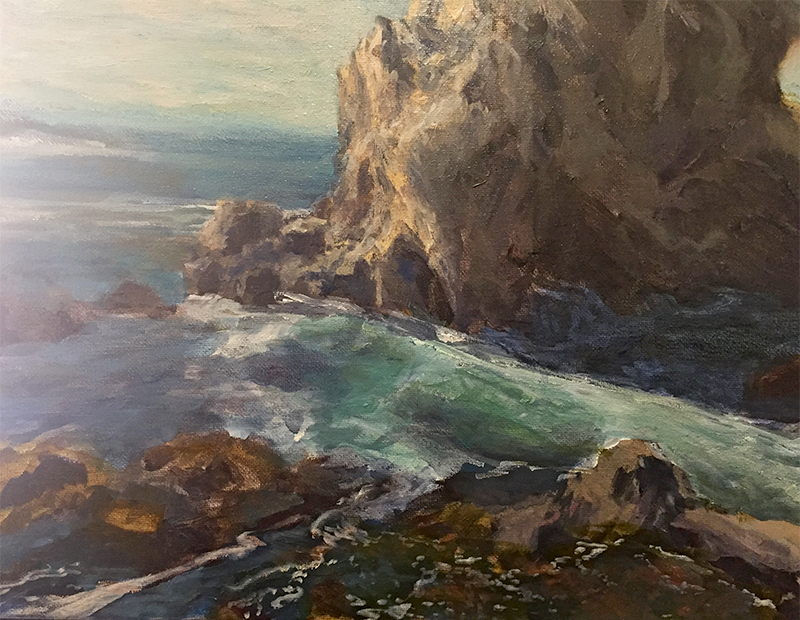 Excuse the glare on this photo, it was taken during the painting session and there are still wet glazes on the canvas. After I had added the details to the rocks I moved onto painting the water. I started by putting thin glazes over all of the water, including the roughly brushed white paint representing the foam that was added in an earlier sitting. The paint for the water was completely dry when the glazes where added. Once again, the glazes here were thinned down with the Galkyd Lite.

Because the Galkyd Lite retains brushstrokes, creating a perfectly smooth glaze was difficult, and when trying to blend areas of different colors, the paint brush would always leave brush strokes in between the blended areas, or pick paint off the canvas instead of blending. For this reason, if a perfectly smooth area of glaze is desired, I think linseed oil might be the better option.

Once again, here is the final painting. You can see that what was added next was the white foam back on top of the water, which was done in the same sitting. I was surprised to find out that the Galkyd speed up the drying process of the glaze so significantly, that even during the same sitting, the glaze had already dried to a mostly tacky consistency. This meant I could continue to paint on top of it in the same sitting, which I think is a huge benefit to the medium over linseed oil. Painting over the glaze while it was tacky allowed the paint to drag over the surface and create scumbles more easily.

Extra highlights were added to the large rocky areas using thick mostly white paint, applied in scumbles. The cloud colors where also added into the lights of the rocks to tie the lighting together better. The smaller rocks at the bottom were also painted over, fairly loosely.

I should mention, however, that the paint also dried very fast on my palette. Within a couple hours, the paint on my palette, which was mixed with Galkyd Lite, had almost completely dried, and had to be scraped off. In other words, the benefits of the medium can also be its drawbacks in other situations. These are helpful things to know, and I think Galkyd lite and linseed oil both have their place.

Now I am just going to show some details. Remember, the images are clickable to view closer. 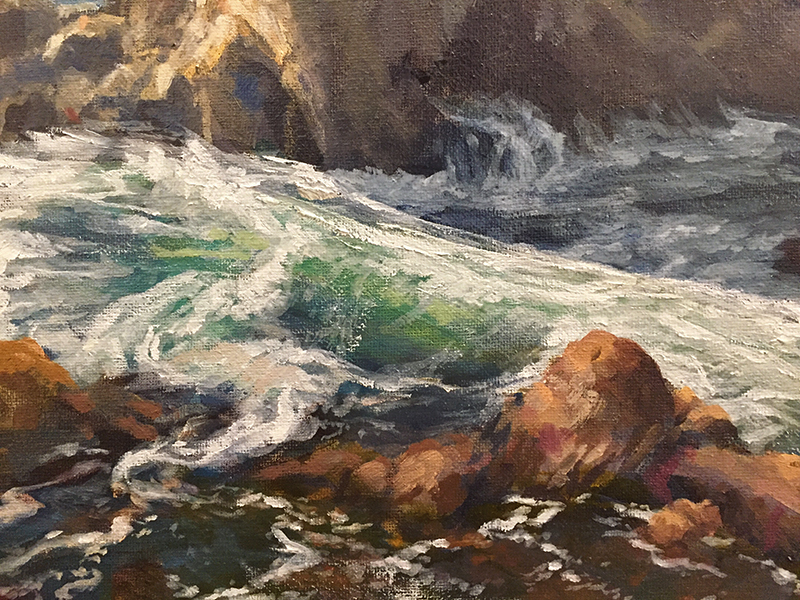 I didn’t really mention the sky, but it was made up of several layers of scumbles. You might notice the sky changes on most of the in progress photos of the painting. None of the layers were intended to be final, but allowing the layers to show through in scumbles was planned. In the final stages, thick light blue paint was added at the bottom of the sky to lighten it up. The clouds were built up in a few layers or roughly applied paint. In some cases dry brushed on, and in other applied with the paint thinned with Galkyd Lite. The darker blue sky from previous layers was allowed to show through the clouds and I think it gives a nice effect. 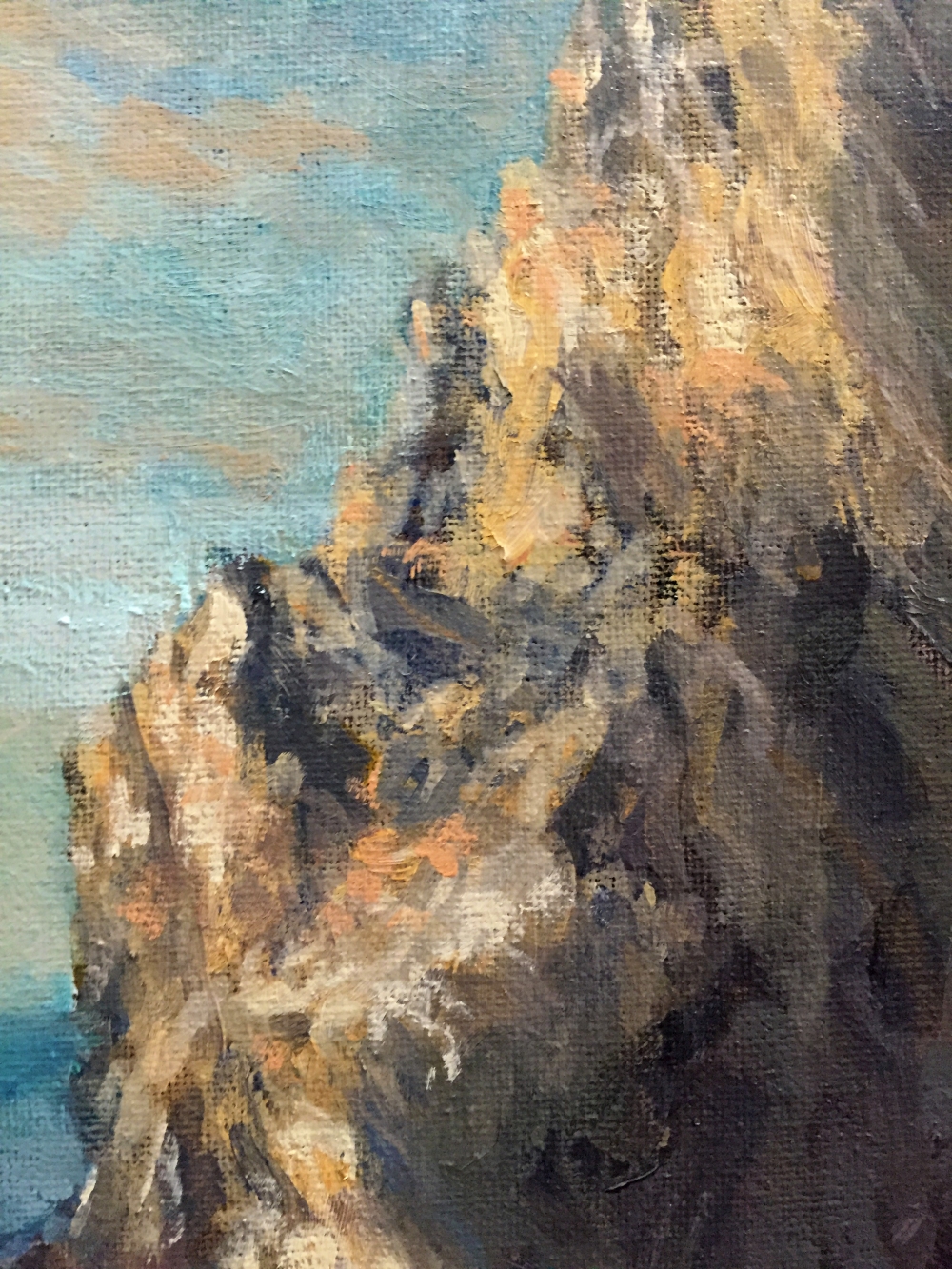 I hope you enjoyed seeing the final painting.