This post was going to be part of the previous post, but since it got kind of long I decided to separate it into 2 posts. I’m going to talk about 2 of the thumbnail sketches I did for the previous post and show some of the process, and also talk about how I work using MyPaint, in case anyone wants to download the program, because its fun to mess around in.

So I started with a gray canvas, and then made a new layer on top of that. In MyPaint, any brushes that interact with strokes already laid down only interact with them if they are on the same layer. So making a new layer is kind of like saying the paint below it dried. I started really simple, just taking black and roughly drawing in some shapes where some rocks could be.

This is the brush I used throughout all the thumbnail sketches. It interacts with any strokes you put down and blends together with them. Its also pressure sensitive, so if you press hard you’ll get a more opaque color, but pressing soft gives you a more transparent color. Since I was just using black, that means, pressing hard gives me black but pressing soft gives me a range of grays. You can also use soft pressure to blend with an area that has no strokes on it which will make the strokes you’re blending with more transparent.

My technique is to start with a light pressure at first. Since there will be some variance in pressure, some spots will be darker and some will be lighter. I kind of let this influence how I form the shapes of the rocks. At this point I’m not super concerned with lighting, as long as there is a tonal difference between the planes of the form. Since the sun is above, I make sure that the tops of the rocks are lighter than the sides.

After I had the rocks blocked in I started painting in the water with white. Again, starting with light pressure so its pretty faint. This just lets me kind of figure out where I’m putting things without committing to too much.

Now I can start using more pressure. Where the waves are crashing there is a lot of foam so I can use a lot of pressure to make whiter areas. Its pretty easy to blend things together too, I just go over spots I want to blend with light pressure. 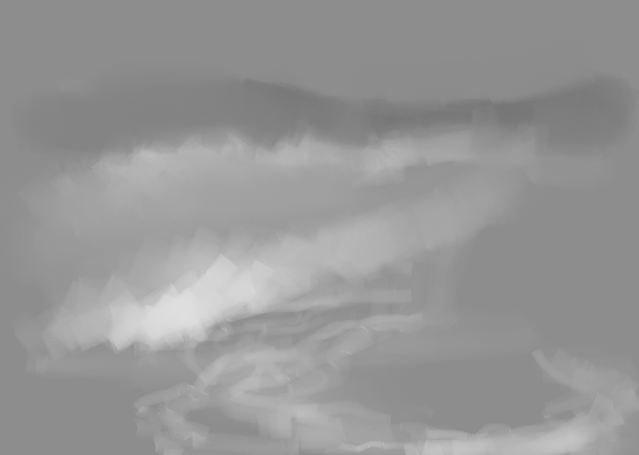 In this sketch I wanted to try starting with the water instead of the rocks. Although after doing it this way, I found that doing the rocks first made more sense. But in this particular picture, I wanted to have a stream of water leading into the foreground. I wanted this stream to act as the path into the painting, like I talked about in my previous post. I also drew in a wave where I imagined it might be crashing on a rock. I think it seems a little weird to do it this way though, since having the rock there to begin with would inform how the wave would crash against it. I also roughly blocked in a wave rolling in the background. 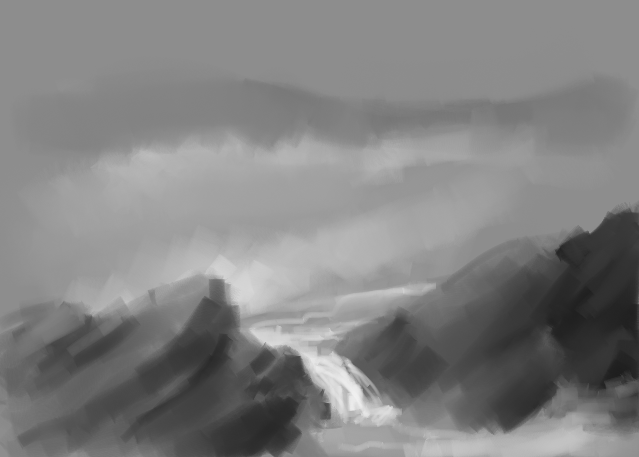 One good thing that came from drawing that wave in before the rocks, was that I let it guide the composition a bit. I wanted to echo that diagonal movement in the rocks. I just block them in roughly, same as I described in the previous painting.

I noticed that the diagonal movement created with the rocks wasn’t very good; it was a little more horizontal than I wanted, so I raised up the rocks on the right side. I also tried to strengthen the diagonal more so by having the wave crash against the rocks on the right too. I sort of merged the waves in the background with this crashing wave to make the space more shallow; perhaps this gives the composition more push forward?